Last weekend, my family and I had an opportunity to visit one of the most fun museums we’d ever been to…The Titanic Museum of Pigeon Forge, TN. 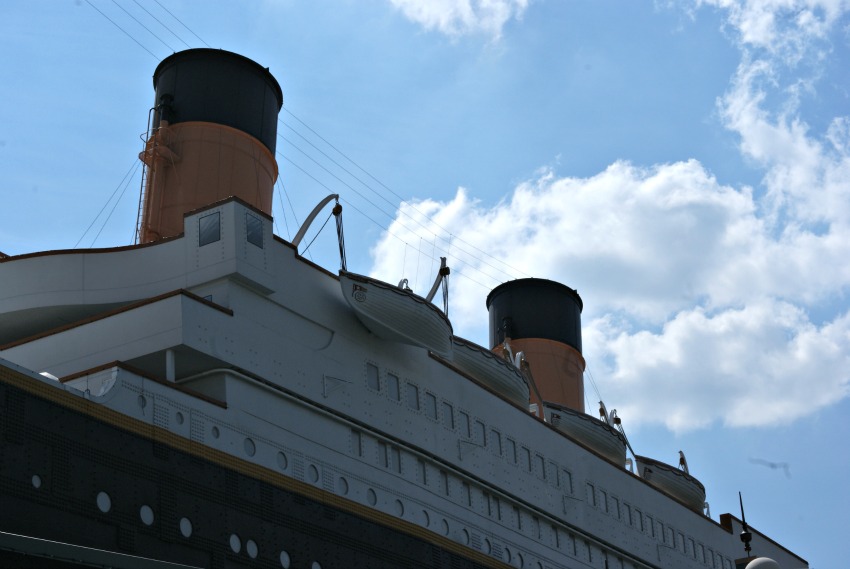 After a short two-hour drive, the museum finally came into view…it was quite a site!  We were greeted at the entrance by maids and ship mates all in costume and character.  As we entered, each of us got a boarding pass of an actual passenger on the Titanic.  I was a 2nd class passenger with a really sad life; her first two husbands and her child had died…she did survive the Titanic’s sinking though, so I guess that was good for her.  Sophie was a 1st class dress designer from London.  She was the inventor of the runway fashion show and she’s the woman that made lingerie sexy…betcha didn’t know she was on the Titanic!
Each of us read about our character and wondered if they would be on the “survived” or “deceased” part of the memorial wall at the end of the tour.﻿ 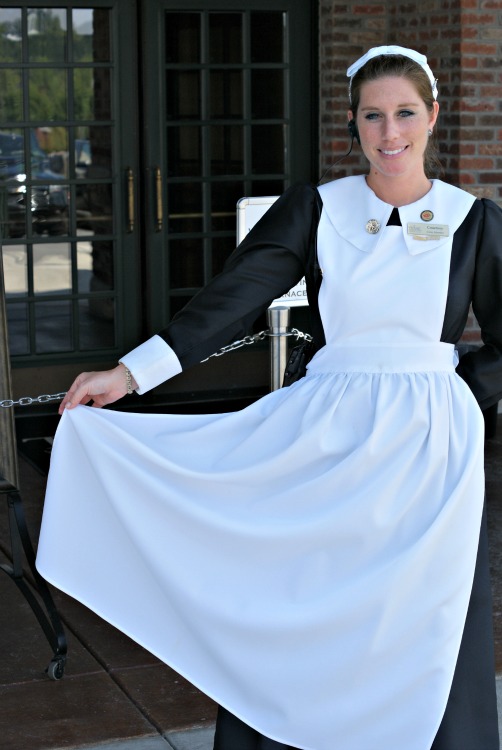 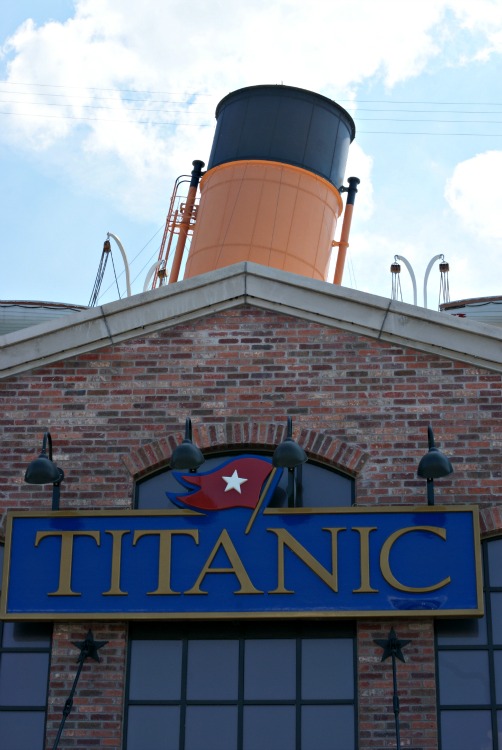 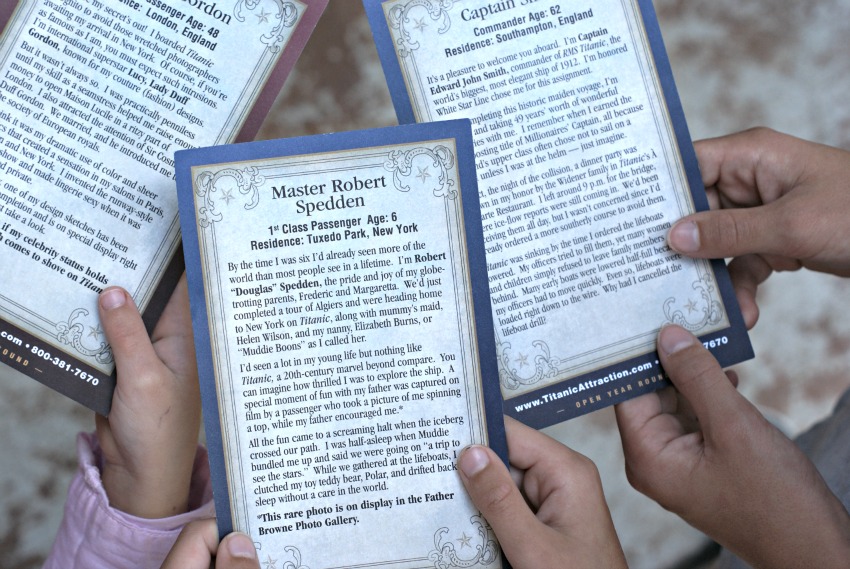 As I wasn’t allowed to take photos inside the museum, I’ll have to try to paint a picture for you with words, because it really was amazing. We walked through the “ship” starting in the servant’s quarters.  We saw a replica of their bunk room, got to walk down hallways like they would have, down in the belly of the ship.  The kids shoveled coal into the boiler and got to feel how hot and exhausting that job would have been.  Everywhere was artifacts recovered from the ship, photos, and reminders of that last horrible night.
The second part of the tour was the First Class section.  This was really amazing. They had made a complete replica of the grand stair case, complete with a white linoleum tiled floor…considered the utmost exquisite flooring of the time…how funny is that?! It was more expensive than marble flooring.  I couldn’t help by think of Jack and Rose when I saw that staircase.  Speaking of those two, there were lots of items from the movie in the museum…one of my favorites were the actual costumes that they wore. So cool!  Also in first class were remakes of their grand suites in all their finery, more artifacts from the actual ship, and a remake of the grand…and I mean grand hallway that guests would have walked down every day.﻿ 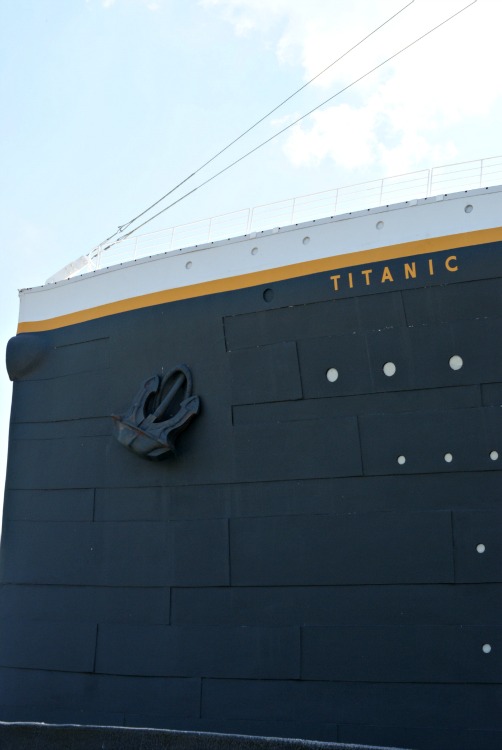 They last section of the museum was all about the ship’s last fateful night.  Something about this part was my favorite, but also the most eery.  We walked into the room that the captain would have been steering the ship in.  There were windows facing out into a starry night.  The kids could steer the ship’s wheel and peer out the windows.  A tour guide gave us lots of information on running a ship of that size and what the helmsmen would have been doing in that room.  As we walked through the next door, he warned us that the next room would be very cold…around 30*.  As we walked into the dark room, I instantly got goosebumps…but not because of the temperature.
The room was really dark…all except for some “stars” in the sky.  The room was very cold.  Adding to the cold temperature was a giant iceberg…yes, an iceburg as tall as the ceiling. All around the perimeter of the room was a pool of water chilled to the actual temperature of the Atlantic that night…28*.  Something about this room was so real.  I could almost feel the fear the passengers would have had, felt the icy water, heard the panic. It was a so real.﻿ 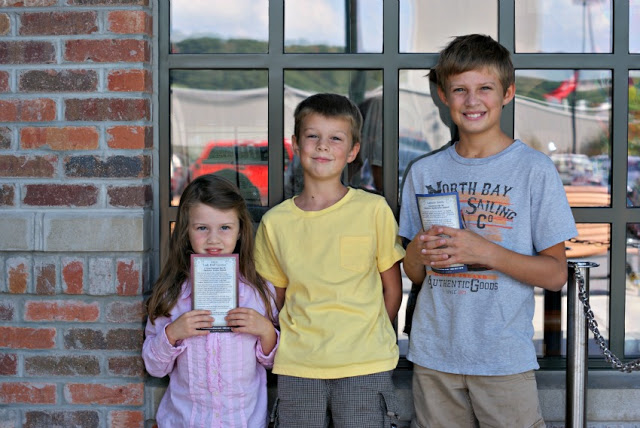 The rest of the tour was all about the wreck: we sat in a remake of a rowboat they used, pounded out S.O.S, tied sailor knots, tried to climb the ship as the incline changed drastically every 15 minutes as it was sinking…all the while we listened to our audio tour, which included story after story from actual survivors telling about the things they saw and heard.
We ended by listening on our audio of the divers recovering the wreckage and what they found on the bottom of the Atlantic.  We got to see things they were able to pull up from the ship: a lawn chair, instruments, dishes.  Did you know that the Titanic’s band never quit playing? Even as the ship was sinking? Now that’s job dedication, right there!﻿ 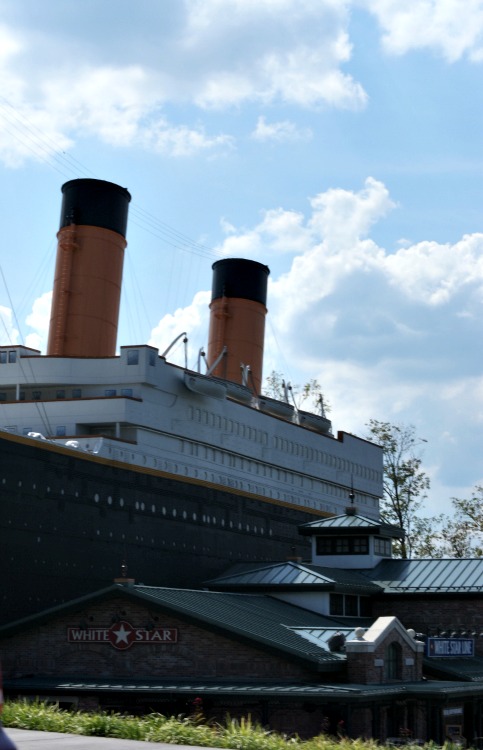 Overall, we left this tour feeling like we tasted history. It really was amazing….well worth the day trip.  You can visit the Titanic Museum’s website here and see a video of the inside of the museum for yourself.  Also, if you’re not in the Pigeon Forge area there is another location in Branson, MO too.  I would highly recommend the Titanic Museum…it was a great experience.
**I was compensated for this review, but all the opinions are my own**﻿
Previous Post: « here’s what’s up
Next Post: friday favorites and general randomness »