This topic has been rolling around in this head of mine for a while. I wasn’t sure how to share it or where to share it, but with today being Martin Luther King, Jr. day, I thought it was fitting. First off though, let me tell you a little bit about how I grew up.

I grew up in a small town in South Dakota. To put it in perspective, we had about 700 people in our community, unless it was 4th of July weekend, it might have topped 900, but that would have been on a really busy year. In our small farming community, there wasn’t just low numbers of diversity, there were no numbers of diversity. We were all white or whiter. That was it. The only black kids we saw on a day-to-day basis were on Sesame Street, but that was what we knew and that’s the way it was. But as kids, it was important for my parents to take us on trips and get out of our small bubble. We never went anywhere super crazy, but we’d go on lots of road trips, see a lot of different things, eat different foods, and meet lots of new folks from all over the world that were traveling just like us. When I was in high school, my parents took us on a trip to Jamaica, where for the first time we were the minority. It was an interesting experience, and I admit that it was eye-opening and a little intimidating being the only white family in a restaurant or a bus. But we quickly adapted when were overwhelmed with the beauty of their country and when we saw our parents making friends with the workers at the hotel where we were staying–even after we left they still wrote letters to the man that drove us for a very long time.

Our worth, our identity, our value is found in Christ, not in gender or the color of skin. To focus on our differences only leads to hyper focus on how we’re different–where is the unity in that? Our parents never sat us down and told us that this person is a Muslim or that person is a black person. They just showed us to ignore what someone looked like by their actions–by their in-exclusiveness to one culture or another–they were interested in all of it. There were no racial jokes told in my house or racial slurs. There was no superiority of white people over others shown in our house. My mother read to us out of their beloved set of Encyclopedia Britannia’s about Jewish culture and Vietnamese culture. We danced around our dining room table to Gloria Estefan’s Conga and talked about South American music. My mom bought us a cookbook of recipes from around the globe and talked about different cultures while we cooked. In fact, I just found that cookbook and I plan on using it with my kids too.

Jarrod and I never discussed how we would teach our kids about diversity, we just treated everyone the same and never pointed out differences like skin color or eye-shape because, well, it doesn’t really matter, does it? It wasn’t until I was raising my firstborn in a mostly white community and we were at the playground with a black family that I realized that this could be the first time my three-year-old could voice what he noticed about differences in race. My insides were knots. This kid of mine could make a total idiot out of me in front of this family by mentioning what he saw to be different, by an innocent kid-like phrase like only three-year-old’s can voice. I watched while the group of kids climbed aboard the jungle gym with my kid, praying something wouldn’t come out of his mouth that would make me want to run to the bathroom and hide. While I watched though, nothing happened. At all. Noah slid down the slide and ran back up the ladder again. He never noticed a thing. And this simple act of aloofness made me so happy. If he had noticed anything, he definitely didn’t share it, and for that I was so pleased. 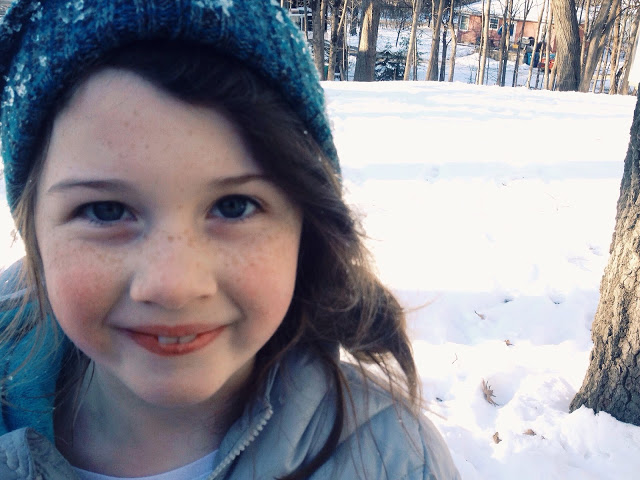 Fast forward to this past summer. My son Jack played baseball. And a little about the community we live in now, it is still primarily white and his baseball team was as well, mostly white kids. And when I say mostly, there was one kid, an Indian-American kid whose parents had come to Minnesota from India about 4 years ago. So if I can paint a picture of this for you, Jack’s baseball team was…how can I say it…a rowdy bunch. There were a few ringleaders, of course, but it was one of those groups of kids where the coach struggled to get a word in edge-wise, no one listened, it was basically a disaster every single week. One who didn’t join in the chaos was Dev [not his real name], the little boy from India. He sat quietly observing the insane behavior from the bench and hopped up when it was his turn to bat and he cheered for the others when they were batting too. I don’t doubt he got his good behavior from his parents who were some of the nicest people I got to know that season. We had great conversations from the sidelines between cheering for our kids about education (they were especially interested in homeschooling), and what it was like transitioning to a new country, my daughter’s dream of traveling to India one day, and the sameness we had in both being new to the community.

So this summer, when day after day brought more and more stories of hateful acts and protesting and anger–from all across the country, I got the idea to do a tiny little social experiment on my own kid. I knew that Jack had one kid on his baseball team who had very different physical aspects than my lily-white, blue eyed boy. Dev’s dark brown beautiful eyes and deep brown skin were what the world would call–different, right?

I called Jack over to me–just the two of us in our kitchen, and asked him this, “Jack, is there anyone on your baseball team that is…well...different in any way?”

His answer was instantaneous and it blew me away.

“Well, Tyler and Conner [we’ll call them] never listen to the coach. They just mouth back all the time and I feel like we can never really play very much at practice or win games because they cause so much trouble.”

I exhaled, finally, and told him to go play again.

One of my favorite MLK quotes rushed into my head and I had to pause and let it sink in for a minute. 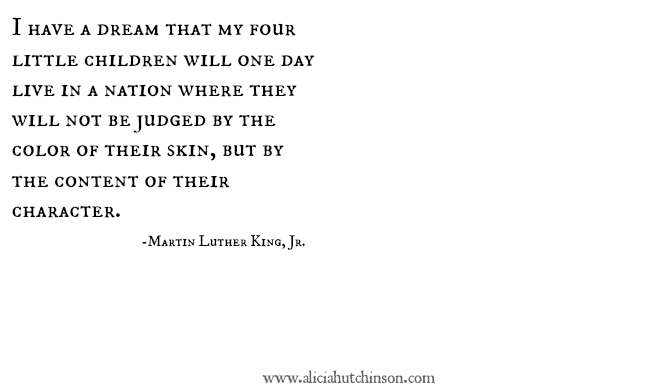 I think Dr. King would be pleased to know that his dream came true in my son. He saw content of character, not the color of skin.

I don’t foresee there ever being world peace, and I don’t know how much of an impact I have on the whole wide world either. But I do know I can do what I can do with my own two hands, with this tiny herd of kids that I’ve been entrusted with for a while. Because my parents started a ripple, and I’m continuing the ripple and I pray my kids will too. I pray that they’ll always continue to sit on the bench with their friends from India and their buddy from Mexico and not ever fathom about setting him or her apart because they have a different color of skin. See I’m into small things with big impacts and I wonder maybe, just maybe if everyone would halt the off color jokes and the talk about all of a certain religion are bad or all of a certain color are violent in their own homes, that maybe, just maybe that ripple would grow even more. and soon we wouldn’t see the need for protesting and hating on one another because, well, we’re all the same–created in God’s image. And that is truly a gift. 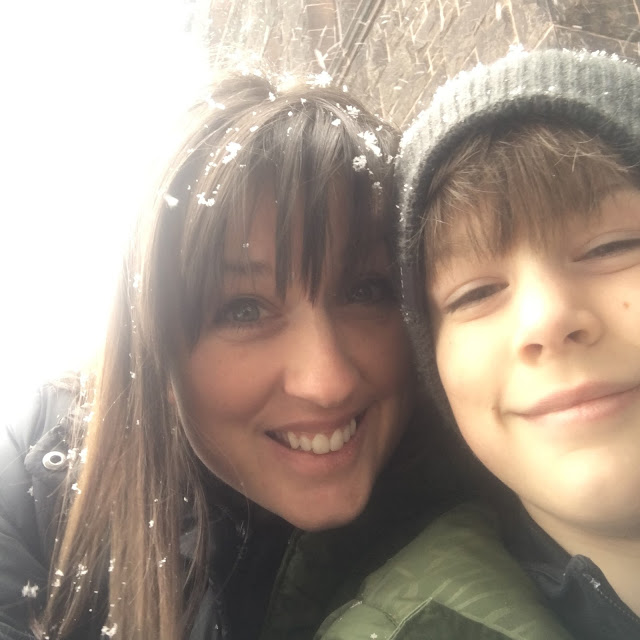 So today, being a day to honor MLK, the man who pleaded for us to not see color but to see the content of each other’s character, I challenge you to extend your hand to your brother or sister that worships a different god than you do, that grew up in a different place than you did…and let your children see you do that. Because most of us aren’t world leaders, most of us aren’t in the Peace Corp, but most of us reading this have children, our own mini-tribe of world citizens we’ll be sending out into the world someday soon…and I want my little citizens to love each other–all the others.